Heron at Pond by Kovalchick Convention and Athletic Center

On my exercise hike this afternoon, I went by the pond just south of the KCAC and there was a small heron at the east end of it. I got darn good views of it, both standing and in flight from several angles and could make out (although I didn't have binoculars):

1. It was intermediate in size between a Great Blue and a Green Heron -- much too small to be the former and definitely too large, and long-necked to be the latter.

2. It had a heavily streaked neck, but was otherwise conspicuously gray overall, especially on the back.

3. Bill was stouter and thicker than a Great Blues or Green Heron's.

6. Flight feathers were darker than rest of the wings (which I saw clearly from above as it flew down and away from me).

The only conclusion I can draw is that it was an immature Yellow-crowned Night Heron. I didn't make out the white spotting that all images show, but again I didn't have binocs. It lacked the facial pattern of an adult, and also had the streaking on the neck -- both immature traits. So a bit odd in presenting a mix of adult and juvenile traits. But size, shape, and all the aforementioned details of color/plumage seem conclusive enough to me. 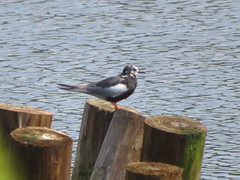