You must have a passport or a passport card to enter Canada and return to the US. This four-day trip will cover Dunkirk Harbor en route to the Peace Bridge as well as areas along the Niagara River and Lake Ontario. We plan to stay at the Days Inn near the falls on the Canadian side. You may take part in the entire trip or in only a day or two by meeting us there. If you are interested in going or have questions, please contact the Higbees (724-354-3493).

Roger and I left home at 6:09 this morning to head to Grove City where we were to meet Linda Wagner and Richard Nugent. We decided to drive through the outlet mall in search of crossbills and redpolls. Near the Columbia store, we parked and walked toward the little stand of hemlocks where we found no crossbills. Behind the hemlocks, however, were birches and perched in the birches feeding on the seed pods were two *Common Redpolls.

Our first stop was at Dunkirk Harbor where we were to meet Ian and Margaret Haigh. Here we listed:

We crossed the Peace Bridge and headed to Old Fort Erie where our first stop was across from the fort. Here the numbers of waterfowl were way down from usual. Possibly the earliness of Thanksgiving contributed to the lack of ducks, but we squeaked out a decent list nonetheless:

The wind was really whipping, making it feel much colder than the 48o it really was. We returned to the vehicles and stopped at various parking lots along the Niagara Parkway adding the following species to our Ontario trip list:

We left the Super 8 this morning at 7:00 a.m. to head to Grimsby where we planned to meet Frank and Sandra Horvath. En route I spotted four Wild Turkeys on roost in a tree. Other birds seen along the way were:

Frank and Sandra were already in line at Tim Horton’s at the welcome center where we were to meet. Frank and Sandra took us to an area where they had seen a N. Saw-whet Owl the day before. We relocated the bird, and everyone had great looks at it. Other species seen in this vicinity included:

Our next destination was the end of Fruitland Road. Here we listed:

At Millen Road we had great close views of White-winged Scoters and a single Hooded Merganser on the lake. Along Green Road we added Mourning Doves and had great views of all the same species. We continued to Oceanic and parked near the playground. This stop yielded the second highlight of the morning, a first winter King Eider. We continued to Grays Road, but the wind was extremely strong; we scanned quickly but found nothing new.

Near Van Wagner’s Beach we walked a trail that crossed the QEW. Along the trail we listed Green-winged Teal, Great Blue Heron, Am. Goldfinch, Double-crested Cormorants, and Herring Gulls. We next headed to Hutch’s for our annual fish & chips lunch.

After lunch we parked near Red Hill Creek to look at the waterfowl. Here were Northern Shovelers, Mallards, Buffleheads, Green-winged Teal, Double-crested Cormorants, Rock Pigeons, and two soaring Red-tailed Hawks. We continued to Windermere Basin where one of the first birds we sighted was a Merlin. Unfortunately the parking lot was gated, so we had to park along the road and walk in. This area yielded more Mourning Doves, Mallards, American Black Ducks, and two Ruddy Ducks that Ian and Margaret spotted that swam around the bend.
We continued up the road a bit and pulled off then crossed the highway to view Windermere Basin Pond which yielded our first Canvasbacks as well as Ruddy Ducks, Lesser Scaup, and Double-crested Cormorants. Flying by were several Great Black-backed Gulls.
Our next destination was Bayview Cemetery. As soon as Frank had parked the Jeep, we spotted our target bird – a red morph Eastern Screech-Owl roosting in a broken-off snag. Wow!

It was getting dark by the time we left LaSalle, so we headed back to Grimsby where we enjoyed dinner at The Fifth Wheel.

We left the motel this morning at 7:00 and headed to Tim Horton’s on Victoria. Just as we were finishing, Frank and Sandra arrived. We drove to the Whirlpool where Sandra was the first to spot the Little Gull amid the myriad of Bonaparte’s, Ring-billed, and Herring Gulls. An American Kestrel flew in and perched in a tree to the left of the cable car while House Sparrows chirped behind us. The trees behind the building yielded two White-breasted Nuthatches, Black-capped Chickadees, a Brown Creeper, and a Downy Woodpecker.

We decided to head to Sir Adam Beck. En route we spotted a Cooper’s Hawk perched in a tree, three American Robins on the lawn, and a Blue Jay in flight. An adult Iceland Gull, a first winterThayer’s Gull, and an adult Lesser Black-backed Gull were present. I had been watching the far corner where last year we listed the Franklin’s Gull when suddenly a Franklin’s appeared and circled over the river, returning under the fence along the right edge. It circled twice before it disappeared as I was watching it through the vegetation along the cliff. I was the only one who saw it. Since it had headed up river, we decided to walk to the rocks. We did not find it at the first access, but two birders told ust that they had seen the gull on the rocks from a point about a quarter mile ahead. We continued along the trail till we had a clear view of the rocks. We spotted the Franklin’s perched on one of the rocks. Unfortunately Sandra, Ian, and Margaret had headed back to the parking lot. I alternately jogged and walked briskly back to alert them to the gull’s presence. By the time we drove to the location, pulled off, and crossed the road, we learned that a man had walked along the opposite shore flushing all the gulls. We could not relocate the Franklin’s Gull, so after yet another search, we started walking back to the vehicles at Sir Adam Beck. We spotted a Dark-eyed Junco and heard a Northern Cardinal along the walk back.

Our next destination was Queenston where we saw one adult Iceland and one adult Thayer’s. In the trees we noted a Downy Woodpecker and another cardinal.

We drove into Niagara-on-the-Lake, stopping first at the golf course. Species found here included Bonaparte’s and Herring Gulls, White-winged Scoters, Buffleheads, Common Goldeneyes, and Red-breasted Mergansers. We next headed to the little park where we saw all of these birds plus Common Loons, Horned Grebes, Double-crested Cormorant, and Long-tailed Ducks.

We returned to Sir Adam Beck with the hope of finding the Franklin’s Gull for Ian and Margaret as it would be a life bird for both of them. We had no luck and decided to return to the rocks, so we drove to the access road for the overflow parking for the Butterfly Conservatory where we parked. Sandra recognized Mourad’s vehicle; we had met him at the ponds where we observed the Buff-breasted Sandpiper and the Eared Grebe this past August. We walked to the location from which we had first checked the rocks. Mourad was there and announced he had the Franklin’s Gull. We all quickly found the bird in our scopes, and the Haighs added it to their life lists, too. Success!!! Thank you, Mourad!

We returned to the cars and drove to Dufferin Island Park where we parked and walked upstream toward the control gates. Checking the wall we found Great Black-backed Gulls, Herring, and Ring-billed Gulls. Farther out on the rocks were several Lesser Black-backed Gulls. On the water were Canada Geese, Gadwalls, Am. Black Ducks, Mallards, and Hooded and Common Mergansers. We decided to take a quick look for the Purple Sandpiper, but it was probably too late in the day. We walked to the usual spot but had no luck.

We returned to the motel where I was the only one waiting outside; I spotted a male Ring-necked Pheasant attempting to cross the road right in front of a vehicle that wasn’t slowing down. The pheasant retreated, the car passed, and the pheasant darted across the road and disappeared into the woodlot adjacent to the Super 8.

The eight of us drove to Lee’s Restaurant where we had our annual meal and enjoyable conversation. After good-byes to Frank and Sandra, the rest of us returned to our motel rooms for the night. 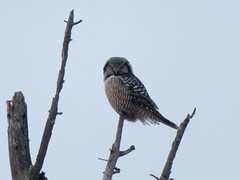