Monday, March 18, 2013 – We left home at 5:08 with Emily Hughes, Derek Clawson, and Tom Glover riding with us. It didn’t get light until we reached Clinton County along I- 80. Birds seen in Clinton included:

In Montour we listed:

We stopped at McDonald’s in Danville for a pit stop and breakfast for Roger and me. Our friends had eaten before 5:00 a.m.! Here Fish Crows were calling from atop the golden arches.


The only species seen in Luzerne were:

We drove through Carbon without seeing one bird while Monroe produced only American Crows and one Red-tailed Hawk.

We reached New Jersey where we spotted a raft of 6 Common Mergansers on the Delaware River. A little farther along we noted another two. Other species seen en route to the lake on American Road, Morris Plains, were:

The lake on American Road did not yield our target species, Pacific Loon, but we did see:

We finally gave up and decided to head to Lake Parsippany. We stopped at several accesses before we successfully spotted the adult *Pacific Loon. Here, too, were:

We fizzled on the Barnacle Goose.

Our next destination was High Street in Carteret for the Monk Parakeets. We were immediately successful and spotted at least 3 individuals. We left Carteret and drove to Monmouth Beach. En route we listed Turkey Vultures and a Red-tailed Hawk. By the time we reached Monmouth Beach, the winds were extremely brisk. Here we spotted a flock of about 120 Brant in flight. The only birds on the ocean were Red-breasted Mergansers while both Ring-billed and Bonaparte’s Gulls were flying about.

At Seven Presidents, we found heated bathrooms. What a bonus. As Em commented, “It’s like a sauna in there!” It was a welcome warmth!!! On the water here were Common Loons and a large flock of scoters, too distant to ID. A *Northern Gannet flew by, and we watched three gull species – Bonaparte’s, Ring-billed, and Herring.

We had reservations at the Sea Girt Lodge in Sea Girt. After we checked in, we headed north to the Suma Hibachi for dinner.

We ended the day with 46 species.

I spotted a red tailed hawk in Jersey City's Lincoln Park this morning on the ground stalking a squirrel, just off the running track near the rotunda on the hill. 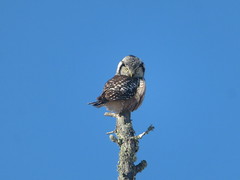