Wednesday, March 20, 2013 – We left the Camelot at 6:45 this morning. It was already light. Our first destination was St. Peter’s Dune Crossing. En route we listed:

At the crossing we spotted:

Our next stop was at Whilldin Dune Crossing where we found:

On the way to McDonald’s for breakfast we listed:

After breakfast we stopped at Rotary Park where we found few birds:

A brief stop at the ferry terminal to pick up a schedule yielded:

We drove to Miami Beach and found it to be at low tide. Hundreds of shorebirds covered the sandflats. Most were Dunlin with a smattering of Sanderlings and Black-bellied Plovers and a handful of Willets. The only gulls here were Laughing, Ring-billed, Herring, and Great Black-backed.

We drove toward Nummy’s Island listing:

Flying over the road was one Tree Swallow. Nummy’s Island yielded:

Our next stop was at Avalon Sea Watch where we found:

We headed back toward Cape May, stopping at Burger King in Rio Grande for lunch. En route to CMBO we noted:

Unfortunately, CMBO was closed! They are open only Friday through Monday in March. At CMBO we saw:

We cruised Whilldin again, searching for the Eurasian Collared-Dove. Once again we had no luck, but we all were able to observe the Red-breasted Nuthatch that Roger had heard this morning. In addition, a Carolina Wren was singing.

We continued to Cape May State Park where we stopped at the hawk watch platform then walked the Red Trail. In the park we listed:

It was 3:35, so we decided to return to Miami Beach to search once again for the Black-headed Gulls. It was high tide, of course, but we had no luck. Additional species here included:

We could see another flock of gulls camped on another spit farther north, so we drove to Norbury’s Landing. Unfortunately, the Black-headed Gull was not among the gulls here. We decided to stop at Higbee Beach on the way back toward Cape May. In a field on the way in we noted a Wild Turkey. We drove down the bumpy road to the canal across from the ferry terminal. Here were:

We returned to the Higbee Beach parking lot and walked several of the trails which yielded:

It was getting late in the day, and there was not much activity. Derek spotted a fence lizard.

We decided to quit for the day and go to Rio Grande for dinner. When we got to the field that had produced the one turkey, we found a flock of eight. Two of the males were displaying. The guys had spotted the Joy Buffet earlier when we’d driven through the town. We stopped there for dinner. Special thanks to Tom. We had a very enjoyable evening with many stories and good conversation.

We ended the day with 101 species. 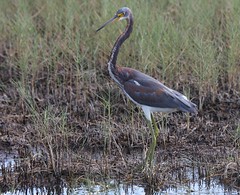